A host of mysterious physical symptoms may occur from toxic reactions to mercury in dental fillings, especially among those who have an acute sensitivity to mercury. Some people, including some dentists, maintain that mercury fillings can cause dizziness, arthritis, colitis, multiple sclerosis, loss of mental acuity, and psychosis in highly sensitive people. There is small but existing evidence to support a possible link to immune disorders, Alzheimer’s disease, Parkinson’s, and other degenerative illnesses of the nervous system. Mercury is one of the most toxic substances on earth. It is well established that mercury fillings do outgas mercury vapors every time one chews food, drinks fluids, or brushes one’s teeth.

What is the Mercury Amalgam Story?

Half of the standard silver fillings, known as an amalgam, are composed of mercury. The rest is made up of silver, copper, zinc, and tin. Fillings containing mercury have been used for 150 years, a fact the American Dental Association sees as proof that such amalgams are safe. More than 85% of the American public has amalgam fillings, and each year more than 200 million restorations are performed, the vast majority of which contain mercury. Nevertheless, there is a small but growing body of evidence that suggests that mercury poisoning may occur in some people. The Food and Drug Administration has called for more research, stating that nothing to this point has been proven.

Taking an active stand against amalgams or recommending that existing amalgams fillings be removed for health reasons places a dentist at risk of having his or her license revoked by the ADA. For this reason, many dentists are reluctant to reveal their concerns about amalgam fillings.

There is some concern that mercury might be replaced with other metals that are equally toxic. Most mercury-free dentists are selective about the quality of the composites that they choose, but patients should always ask for composites that do not contain aluminum, barium, or other metals, to avoid the possible toxic effects of these metals.

Dr. Michael Ziff, an Orlando, Florida-based dentist and a leading proponent of alternatives to mercury fillings, points out that composite fillings (generally made of plastic) are made of long chains of molecules that are too big to be absorbed by the cells in the mouth and digestive tract. Studies have shown that the body eliminates through the feces any pieces that come off the composite filling. In any case, Ziff says, the composites do not remotely compare with the potential toxicity of mercury. Research has also shown that composites hold up as well as mercury fillings if the composite is placed correctly. For this reason, composites, which are termed technique sensitive, require an experienced dentist to fit them properly. In the meantime, new composites are being developed each year that are stronger, more durable, and easier to work with.

How to Find a Mercury-Free Dentist

Even if a dentist claims to be mercury-free or holistic, you should interview your dentist about his methods and techniques. Dr. David Kennedy, a San Diego-based dentist and nationally known expert on placing composites, says that most composite fillings fail because they shrink after being stalled. The plastic’s shrinkage causes the filling to move away from the borders of the cavity, allowing the filling to fall out. Sometimes the filling is not fitted into the tooth properly, causing the filling to break up or decay at the edges of the tooth.

All these things have to do with placement and not durability of the materials. Therefore, the following standardized procedure has been designed to insure successful fillings. You can interview your dentist and make sure he or she is aware of these techniques:

Having a composite filling placed and having an existing amalgam removed are very different issues. Few dentists are willing to advocate removing existing amalgams, and the ADA has made it a violation of its code of ethics for any dentist to recommend that amalgam fillings be removed for health reasons. Dentists who have been urged the replacement of amalgams have lost their licenses. Removing amalgams will release mercury into the bloodstream and may well have great toxic effect than if your fillings were left alone.

The following organizations that can help you find a qualified dentist to provide mercury-free services:

The International Academy of Oral Medicine and Technology

first perspective on healing that incorporates a complete worldview 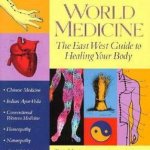 Tom Monte’s book is the first perspective on healing that incorporates a complete worldview. It will serve as a useful source to anoyone who wishes to approach the healing process in a truly holistic manner. On Tom Monte’s book, World Medicine: The East West Guide to Healing Your Body