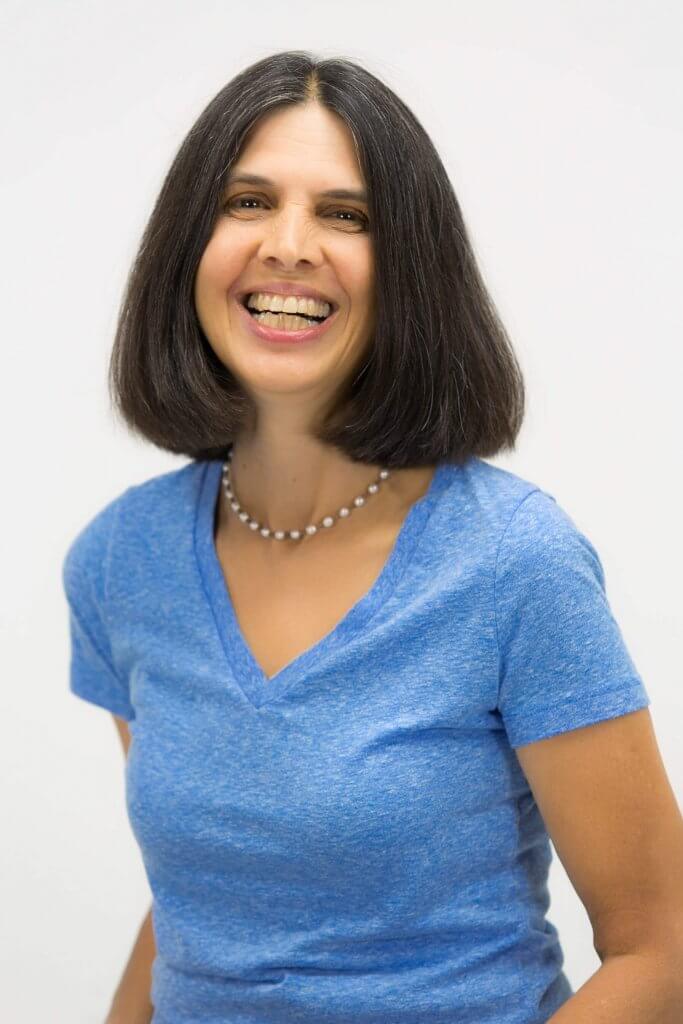 I was born in Montreal, Canada on July 6, 1953 to an Israeli mother and a Canadian Jewish father. I grew up in a guest house in Atlantic City, New Jersey. We were a very ethnic family and spoke Yiddish as a first language. My parents were also huge fans of Western Medicine. Since I was always sick with bronchitis or whatever the current virus was at the time, I took every imaginable antibiotic and got to know our family doctor very well.

Then, in a terrible chain of events, everyone in my family started dying. My father died of cancer when I eleven, my mother died of cancer when I was eighteen, and my grandparents and uncle passed away during my school years as well. It was traumatic to bury one family member after another. I guess more than anything, it made me aware of how temporal this life on earth is. It also made me question everything, including the reliability of medical doctors.

In January 1975, my senior year of college, I went to the Rider University pub for my first and only time. I thought that I should have the pub experience before graduating. I never went there before because pubs were not my thing. Although I wanted to meet someone interesting, I was convinced that nothing good or real could happen in a room with a lot of drunk people talking about nothing. Also, all they served at the Rider pub was beer and wine, and I didn’t drink either. The only alcoholic drink I liked was a pina-colada, especially when it had a scoop of vanilla ice cream inside.

After a few minutes, some guy was introduced to me. He pulled up a chair and we started talking. It was hard to hear him because the music was so loud and I could barely see him because it was so dark in there. But he wanted to talk about all these interesting things. The first thing he asked me was if I had ever been in love. He then wanted to know what a girl like me felt like when she walked into the pub, and what did she expect to find there. The conversation just took off from there. We spoke honestly about my feelings and his feelings for four hours. At the end of the night, I remember saying how much I loved our conversation, and very much wanted to continue talking. I hoped we could become good friends, and I really did mean that. And in the energy of this newfound realness, I added that I didn’t think we would ever end up married because he wasn’t really my type.

Anyway, that guy was Tom, and two years later we were married in the college chapel, just across the lake from that pub.

While Tom and I were still dating, I completely stopped eating red meat. I also began to go into the health food store and look around. I would buy things like sugar in the raw to put in my coffee (the perfect drink to have with German chocolate cake), and would also sprinkle unprocessed Miller’s bran on my food, because an article in Cosmopolitan said we were all constipated and needed that. I didn’t even know what constipated meant, but it was around that time I also found out that I was indeed constipated.  This was how it all started.

One day a guy named Stan Pakinowski (known to everyone as Pak) came into Tom’s dorm room and started talking about “this weird diet” that his friends, who now lived in Boston, were practicing and that it had cured one of them of cancer. All he knew about it was that it balanced something called “yin and yang,” that dairy was bad, and that it was good to be skinny.

Although the diet sounded crazy, it grabbed me. I was always very open to weird things. I asked Pak to please get more information from his friend so that I could learn about this diet. But he was busy and kept forgetting.  Every time I saw him, I would ask him again.

A few weeks later, Tom and I were in the health food store and I was looking around.  Tom picked up a book and was becoming obsessed with it. It was called You Are All Sanpaku, by William Dufty. Tom asked the store owner if there was a public bathroom with a mirror. There was. The next thing I know, my future husband disappears for twenty minutes. Apparently, he was in the bathroom staring at himself in the mirror, trying to figure out if he was “sanpaku.” (He was.)

Tom finally emerged from the bathroom and announced that he had to have this book, but the book was $12.00 and he only had $7.00 in his pocket. Since the book had been sitting on the shelf of the health food store for several months and no one else was interested in it, the store owner gave it to Tom for $7.00, as it was clearly meant for him — and for us.

That night, as I was cooking dinner and Tom was absorbed in his new book, he announces to me that, “You are going to want to read this book.” So I asked, “Why?” And he says, “Because it’s about the diet that Pak was talking about.”

I immediately stopped what I was doing, looked over Tom’s shoulder, and we read together. The next day we drove down to the Jersey shore, and spent the day reading You Are All Sanpaku, side by side on a blanket on the beach. It was the summer of 1976. The book was all about macrobiotics, the relationship between diet and health, and the importance of whole grains.  I was completely sold!

I came home and threw out everything in my kitchen that was not on the macrobiotic diet, went into the health food store in Princeton, New Jersey, and bought some staples — brown rice, miso, tamari, dried beans, all these unusual things. That night I made split pea soup. After that, things started happening fast.

Pak finally gave me the phone number of his friend, Jeff Wycoff, and Jeff sent me a book called Freedom Through Cooking, by Iona Teeguarden. I’ll never forget my excitement when the book arrived.  On the first page, Jeff wrote “This is just beginning.”  I felt those words deep in my soul.

Within a week, I was taking cooking classes with Marilyn Waxman in Philadelphia. And Tom and I started going to dinners and lectures with Denny Waxman, as well. It was such an exciting time of learning and opening up to a whole new perspective on life and healing.

I stopped going to doctors after that.  I found a new way of living.  And I never looked back.

In 1977, Tom and I got married and then pregnant two years later. We had three human children, and thirteen furry children — but not all at the same time. Our human children were all born at home and breastfed, and were not vaccinated or circumcised.  (You can read more about our experiences with vaccines by going to my blog, “What Happened To My Three Non-Immunized Children When Whooping Cough Broke Out,” which is here on the website, in the “Resources” section.) I spent hours every day preparing a macrobiotic diet, and loved every minute of it. We went for acupuncture, herbs, chiropractic, and homeopathy.  Although many women found work in the outside world more meaningful, I was more than happy to give up my teaching job and be a full time wife and mother. I thought it was the most important thing that anyone could do.

Aside from my love of family, cooking and healing, I have two other great loves – singing and dogs. Although dogs fit into the category of family, since I am so crazy about them, I felt that I should mention them again. We currently have two dogs — Stanley who is a blonde cocker spaniel and Daisie, who is a black cocker spaniel. We also take care of Hailey, our daughter’s Cavalier King Charles spaniel. My other love is singing. I have sung barbershop with the Sweet Adelines, hymns in various church choirs, got down with a rock choir, and currently sing with the The Healing Circle Singers.  But I will pretty much sing any place that they don’t throw me out of.

Tom and I have always worked together. When the kids were young and I had my hands full just with them, the only thing I ever did for Tom was edit his manuscripts. I wrote the entire first draft of the Natural Healing Encyclopedia, and did research on many articles and books that he was working on. Nowadays, with his consultation schedule being very heavy, I make appointments, do the billing, answer e-mails, and offer my support in any way needed. I also help him plan his many programs.

Sometimes I think I’ve been given the gift of many emotional challenges so I would have lots of material to work with. Among the most meaningful healing experiences I’ve had was with Barbara Brennan Healing (author of Hands of Light and Light Emerging), which I studied intensively with a teacher in Hartford. Over the years, I’ve experienced many incredible breakthroughs with body centered therapies.

And ever since we first met, in 1975, at the Rider University pub, Tom and I continued to explore and process the inner world, and the journey from pain and darkness to love and light.

It’s a great life! I have no plans for the future, except to continue to follow the impulses of my soul. It is an honor to support my husband in his work which brings more light and love into this world. I could never have predicted that my life would turn out as it has.  I believe in staying open and not making any plans. Rather, I walk in faith, knowing that I am always in Good Hands.

I feel an inner peace

I started working with Tom after a horrible accident, that occurred the day after my wedding, which left me in bed and with lots of frustration and anger, most of which ended up being directed at my new husband. Through working with Tom, I not only dealt with that acute episode of anger, but I found some other skeletons in my closet as well, which not only had I not dealt with, I had never even acknowledged them. Seeing how much I had learned just from our private sessions, I wanted more and so I signed up for the healer’s course and it was an amazing experience. My husband finds me a changed woman. I feel an inner peace, though I am literally always surrounded by chaos (I work in an emergency room). Most amazingly, the conflicts in my life just seem to have diminished and become so much easier to handle and manage. I have grown in tolerance, and patience, and most importantly faith. The other night my husband and I were falling asleep and we could not remember our last big fight, which prior to Tom’s class and counseling were at least a biweekly occurrence. I feel that my heart has expanded, and that I have grown comfortable in my feminine strengths. I am living a life of faith, and no longer with fear. I am very grateful for this course, as it built a foundation of spiritual wisdom and practice, which has expanded my heart, and my ability to love.